My recent grump-piece about field safety has returned to the foreground of my thinking as National Geographic chose to further publicize an incident from 2014 in which a scientist self-rescued from a crevasse in a snow-covered glacier in the Himalaya. By the scientist’s own admission he was alone, therefore unroped and visibly without the typical personal protective equipment (e.g. helmet).

To his credit, the scientist was able to climb out of the crevasse. Others in his situation are not so lucky, and the consequences don’t end in the crevasse: criminal charges are being brought against the employer of an Antarctic helicopter pilot who died in a crevasse fall. Some may have the savvy to extricate themselves from a crevasse, but all is for none if you’re jammed in hard, too deep or too severely injured.

I may be criticizing from an armchair, but I am not entirely an armchair critic. Crevasses are a fact of life and death for people working on glaciers. Glaciers are slot machines, and like slot machines, the odds are in the house’s favour and not yours. I’ve spent entire field seasons end-running or stepping over  slots commuting to field sites, and many trips roped up above the snowline to collect essential samples or measurements.

Here are some snaps from work which will be unlikely to be tagged with “heroic scientists risk life & limb” on any time soon on social media. 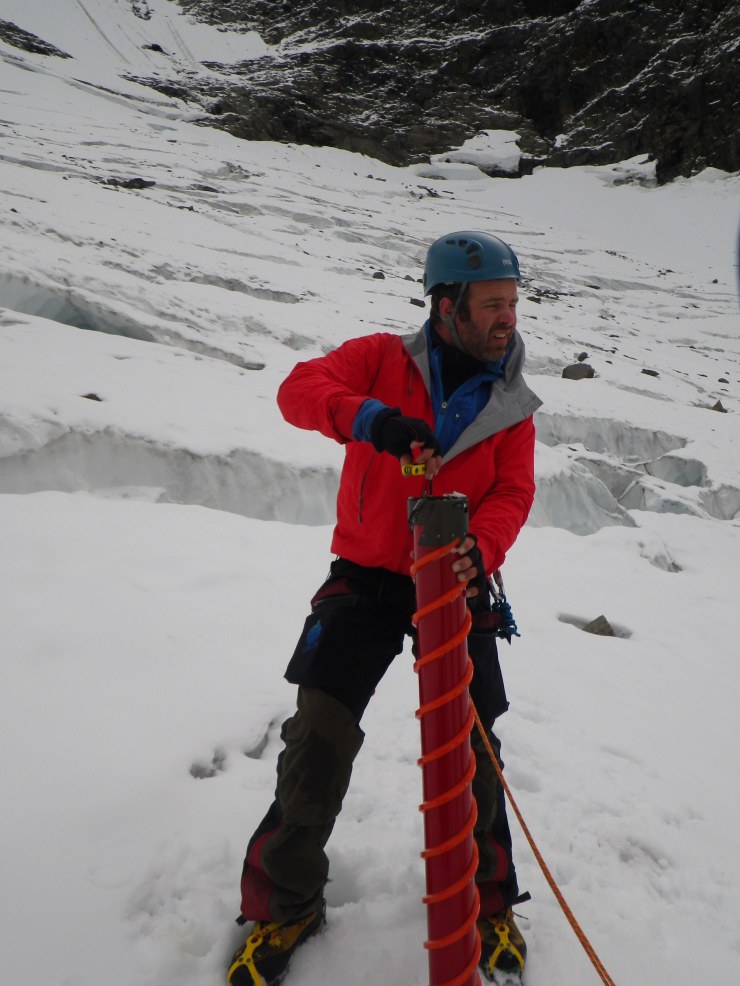 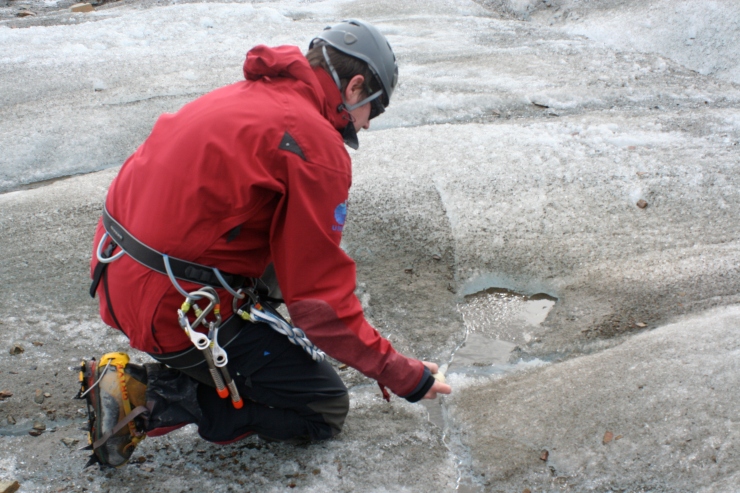 Sampling on bare ice, South Georgia. At this point in the day, the risks from crevasses were nil. But when working on unfamiliar glaciers it pays to wear a helmet and harness racked up for two reasons: firstly, it speeds up a transition to roped work, but also should a fall occur, it offers a much better point of attachment for rescuers than shell clothing. (Photo courtesy Dr Anne Jungblut). 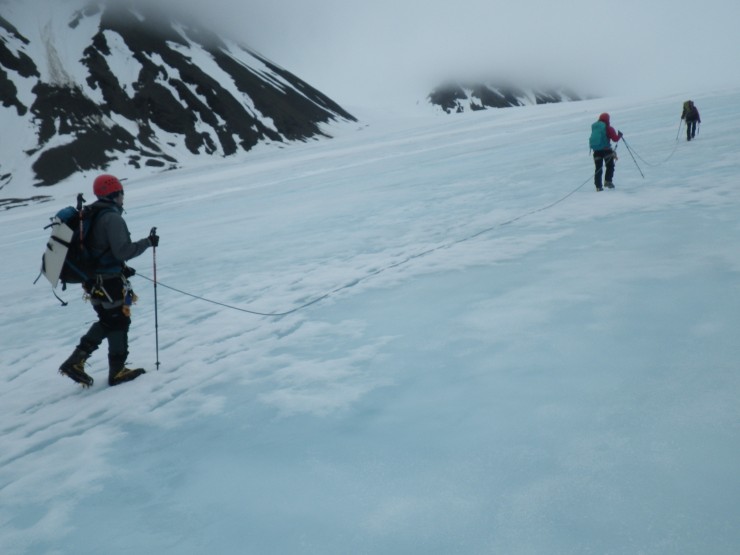 A team of three moving up to the snowline on a Svalbard glacier. The site is well known to us for >10 years, but the exact position of deeply incised melt channels varies, meaning a cautious approach is merited from the start of a new season while the glacier is wet. Recreational mountaineers are unlikely to work in threes, carry the full range of kit or (potentially) rope up on terrain such as this. Different ball game. 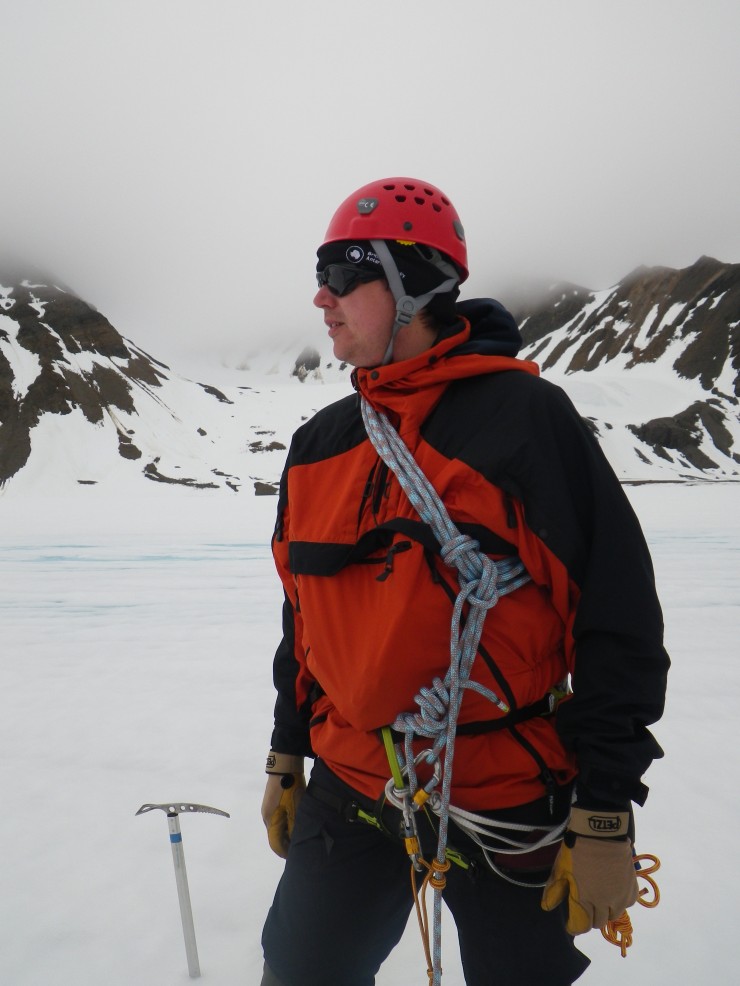 Yours truly. Given my dainty proportions I am best placed at the tail end of a team of three. In this position, if I do not hold the fall, build decent anchors and transfer safely to them the consequences are likely to be serious for all.

For each of those trips there is a period of refresher, rehearsal and training. When working with scientists new to glaciers this is essential, but even after a decade I still practice basic skills of tying in with chest coils, moving while roped, self-rescue and building pulley systems before the start of any period of fieldwork which could require travel on snow covered glaciers.

None of these photos illustrate a scenario comparable to 127 Hours or Touching The Void – for a good reason. As such they are unlikely to have a fraction of the “reach” of a drama in the media.  Yes, we all have bad days at the office from time to time, and sometimes photos or video from such days play an useful role as “teachable moments” – be it for training or inquests. However, their promotion on social media to the general public distorts the reality that these are issues of workplace safety, not fallout from adventure for its own sake.

To sum up, I’ll borrow some boldface:

The underlying principle behind all Antarctic travel is the need to apply conservative and reasoned judgements to all decisions. Accidents often result from a chain of events caused by a number of small errors and bad decisions that eventually snowball into a serious situation.

From the BAS Field Operations Manual. One can substitute Antarctic for fieldwork in any number of snow and ice environments without losing the message. In crevasse country, a gram of preparation will beat a kilogram of badass.  The Field Ops Manual is publicly available at the user’s risk (and due to be updated) – but is a good source of reference material on field safety in polar environments, along with the Royal Geographic Society Polar Expeditions Manual. Hardly clickbait, but a starting point for being safer.